Verbal rhetoric is the choice of or omission of words to convey a desired meaning.  Writers and speakers use language to create an outcome.

Connotation and denotation of words: Denotation is the direct meaning of a word.  For example, the word “Porsche” is denoted to mean a vehicle with a motor, four wheels, and windows; it is the literal meaning of the word.  Connotation, on the other hand, gives a word an implied meaning.  So, the same word “Porsche” still means a vehicle, but the connotation of this word insinuates wealth and, perhaps, high maintenance.

Positive and negative word choices:  All words can have positive, negative, or neutral meaning. For example, the word “female” has a neutral meaning and denotes a person of the female gender.  However, similar words describing a person of the female gender can be positively emphasized, like “woman,” or negatively emphasized, like “chick” or “bae.”

Positive and negative connotations emphasizing words:  Use of connotation is often aided by positive and negative tone.  A speaker or writer intending a positive message will use words that have a light and positive tone.  For example, if it is raining, but someone wants to emphasize the positivity in rain, he or she might say, “The gentle rains graced the hills today.”  The words “gentle” and “graced” are both positive words, and they bring to mind a picture of soft rain nourishing the land.  A speaker or writer intending a negative message or skeptical message will use words that have a heavy and negative tone.  Using the same example of rain, this speaker might say “The fat raindrops pounded the ground.” The words “fat” and “pounded” are more negative in nature, and this picture that comes to mind is of an angry hard rain that is brutal to the land.

Omission of Words:  Unless bound by legal obligation to present certain information to the public or listening/reading audience, speakers/writers can choose to leave out words/information that has the opposite effect on their message.  For instance, if a writer wanted to focus on the strength of men working a laborious landscaping job, the passage might look like the following (with what might be omitted in parenthesis):

The men work voraciously each day, powering through the hours with a drive that equals a hundred oxen.  Their muscles shine in the noon-day sun, a sign of their strength. (They work for little to no pay for these laborious jobs.)

*The parenthetical sentence might be a fact about these men and their low pay, but if the passage is meant to showcase the men’s strength, this sentence creates an opposite and more negative message than the rest of the passage suggests.

Emphasis of words and omission of words are two strategies in creating a rhetorical message.

Exercise:  For the following list of words, identify the denotation and come up with both positive and negative connotations.  The first is done as an example:

Visual rhetoric is the use of person, prop, and photographic effect, and the placement of all three within a visual representation, similarly using principles of ethos, pathos, and/or logos (credibility, emotion, and/or logic).  Visual rhetoric is found in pictures and posters (general or political/awareness), album covers, advertisements, television shows, and films.  The combination of visual elements in a show or film is called mise-en-scene, and the use of sound (verbal or musical) is added in looking at tv advertisement/tv show/film rhetoric.

Person/Character:  People are carefully chosen in photographic posters/ads or in film; these people have the mannerism and action that the designer/author/director is using to convey information in a certain light.

Props:  Every item in a visual static or moving picture is chosen carefully to go along with the intended feeling of the shot. Every item in a picture, from the coloring and set up of the room/scene to all the animate or inanimate items in that room/scene, is chosen for a particular reason.

Photographic Effect:  Images make use of camera angles, focus, and color/font of wording to add to the use of person and prop.  Camera angles and focus allows the creator to illustrate a concentration on a certain person or item which creates the social/moral/ethical/creative message intended.  For example, a picture with an angle looking up at a mother scolding a small child makes the mother look taller than she is and gives her a look of authority.  Color and font of wording also is used to make important phrases stand out or exude emotion.  For example, a black and white photograph with a character with a pink ribbon pinned on her shirt and pink lettering “#forher” emphasizes the pink to stand out and represent an idea around breast cancer.

Example:  This is one of my favorite ads from the 1980’s.  It is a beer ad from a women’s magazine.  Let’s take a look at the person/prop/photographic effects: 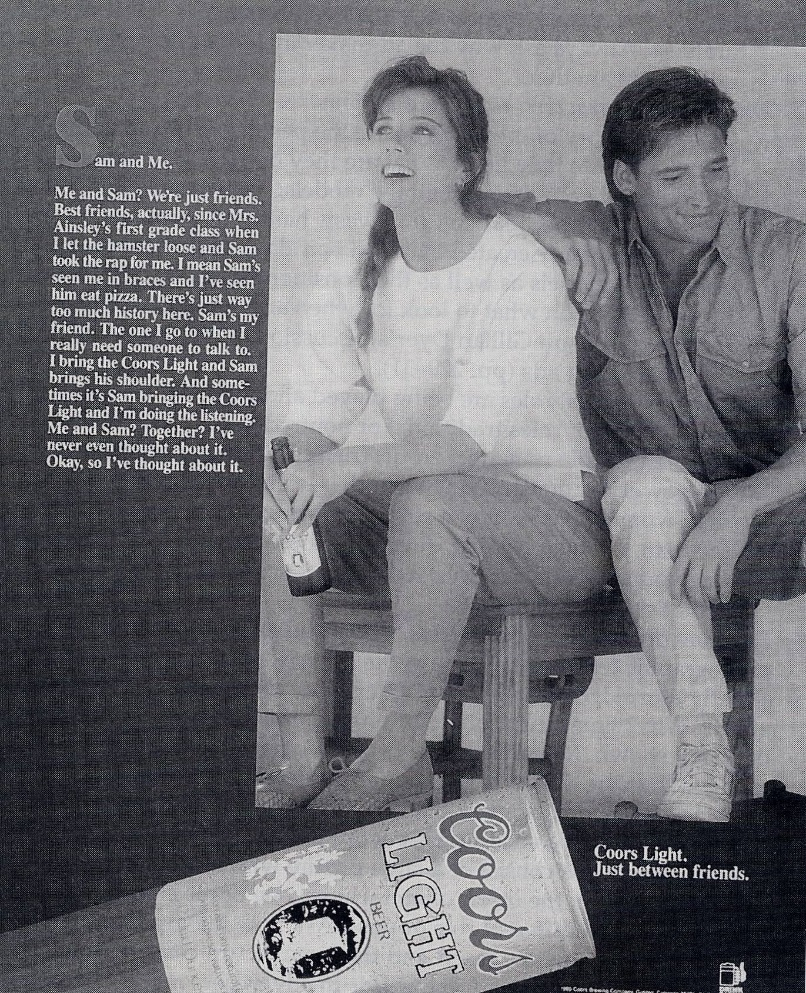 People:  There are two people in this ad, and they are touching each other.  Specifically, he is leaning on her.  They are both comfortably dressed, and for the 1980’s, they represent the girl/guy next door kind of people.  Her hair is in a side braid, again a sign of a relaxed atmosphere. She is looking up (maybe thinking of the future), and he is looking down (maybe remembering the past).  She is holding the beer which is being advertised.

Props:  Not a whole lot, but there is the beer, and the characters are sitting on what looks to be an old school desk.

Photographic Effect:  The picture is directly on the people; however, the man is cut off a little bit.  There is a paragraph of wording on the side started off with a big “S”.  The paragraph seems to be a stream of consciousness thought of the woman as she ponders her relationship through the years with the man.

So what do we learn about the rhetorical message in this picture advertisement?

We learn that this message is intended for a female audience, and that the advertisers are using emotion to persuade females to buy Coors Light.  The ad promotes a relationship that had started in first grade and had grown through the adults pictured today.  The ad illustrates that where the relationship goes from here is up to the woman because she has the beer, she is more centered in the picture, and it is her thought process the audience is following in the paragraph.  The ad is promoting that women who choose to drink this beer can have that wonderful, comfortable relationship with men that they see as potential “more than friends” types.  This ad uses pathos (emotion) exclusively to convey its message.

Exercise 7: Look at the following pictures from posters and film scenes and discuss the use of person, prop, and photographic effect. 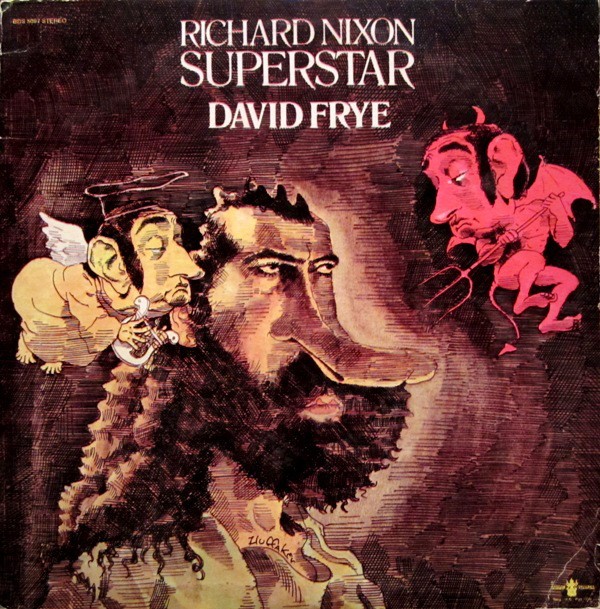 1. This is an album cover from 1971 from comedian David Frye who was an expert President Richard Nixon impersonator.  If you are not familiar with the musical Jesus Christ Superstar, it was a raging Broadway hit in the 1970s, so this is a little bit of a parody on this along with his commentary on Nixon. If you have no idea who Richard Nixon is or have never heard of Jesus Christ Superstar, discuss this image with your instructor.

2.  The bathroom scene from the movie Hidden Figures.  This movie paid homage to three African-American women who worked as mathematicians at NASA during the space race of the 1950s and 1960s.

Most rhetorical analysis essays will look to prove the intended message of the rhetorical strategies of the visual.  An advertisement rhetorical analysis will often look at if the ad was effective in reaching an intended audience, or might just inform readers of the use of ethos, pathos, and/or logos used or the content of the ad.  A television ad can be analyzed similar to a print ad, but the addition of dialog or music will add to the effectiveness.  An awareness poster/visual rhetorical analysis might look at how well the message is conveyed or if the cause it is relaying is understandable to the audience.  Television show or film analysis can focus on the entire work, or can be based on one clip/scene; these rhetorical analysis papers can be many types:  they can look to illustrate how the show/film fits into a certain genre (horror, comedy, etc.); they can look at how certain props are used within and why; they can look to illustrate an era and its social values; and the variety of messages are endless. 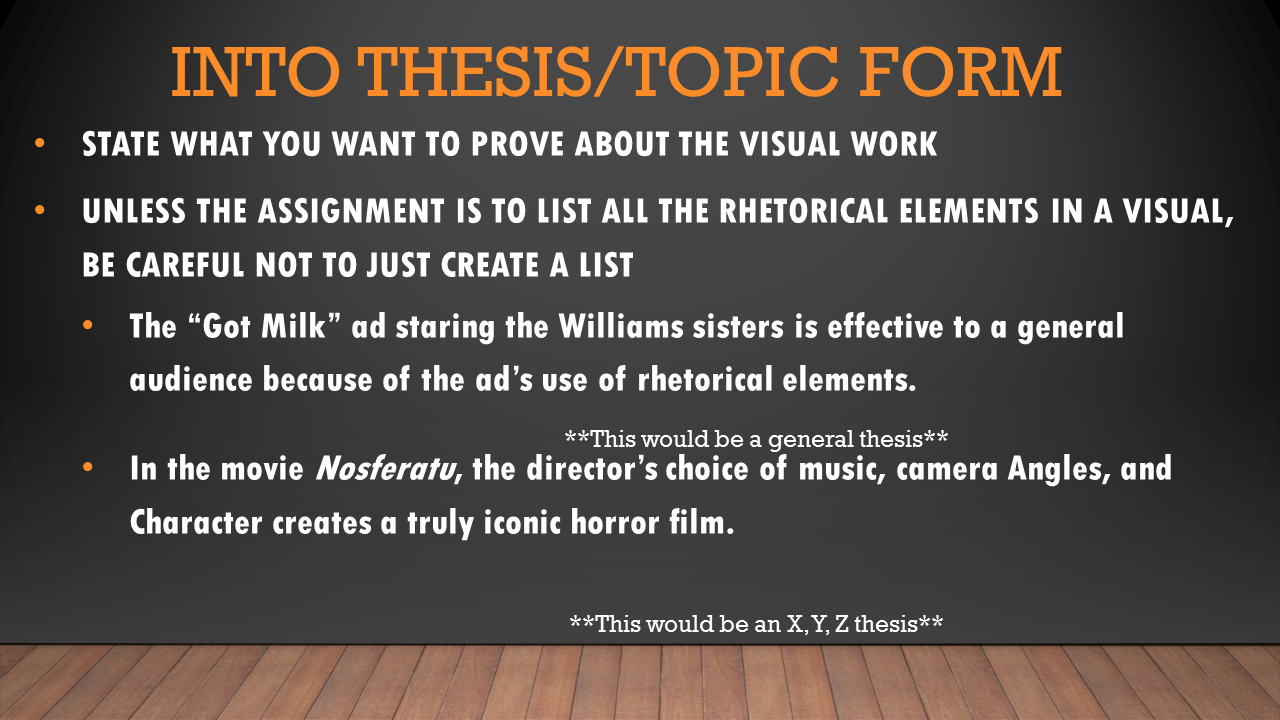 For the two images above, brainstorm some possible thesis ideas and body paragraph points from the discussion you have had about the elements within the visuals.