For a tutorial on MLA style from the Purdue OWL, click here: 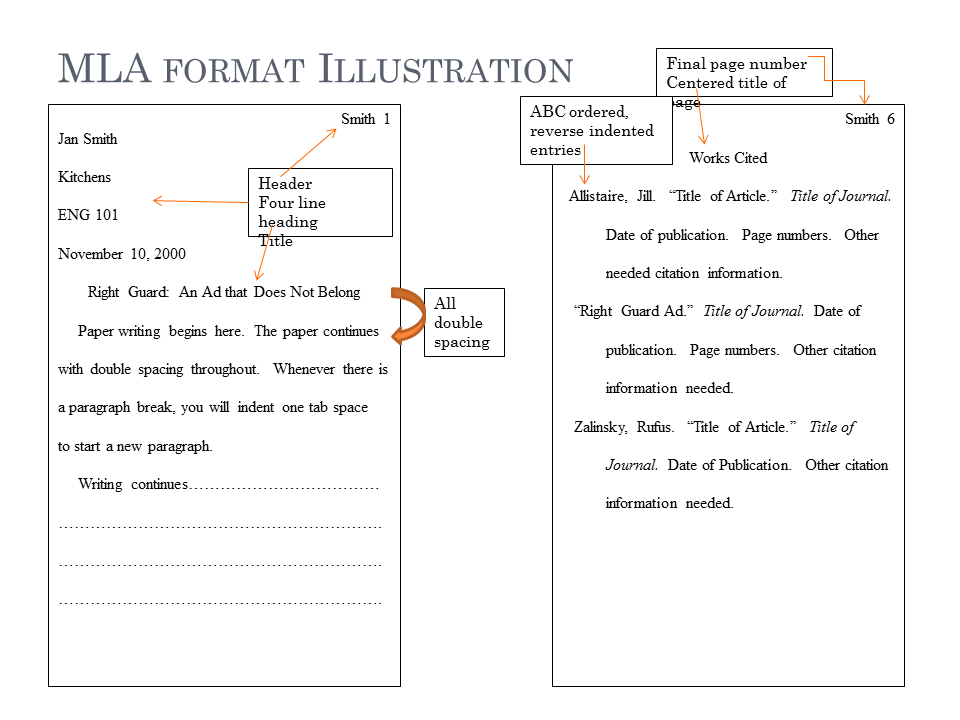 The new MLA documentation and citation style centers around elements within “containers.”  Each container has core elements so students can easily put any type of citation together.  Also, these new core elements are now only separated by commas, so no elaborate punctuation is needed; students only need remember that at the end of a container, there is a period; all other information is separated by commas.

Paraphrasing material from a source is when a writer uses the main idea of selections from that source.  Generally, a few sentences or a small paragraph is the most a writer can effectively paraphrase in his or her own words.  Much more information than this gets into summary and this is usually not recommended.

“Indeed, it seemed impossible for either of us to remain much longer in the house:  the fall of coals in the kitchen grate, the very ticking of the clock, filled us with alarms.  the neighbourhood, to our ears, seemed haunted by approaching footsteps; and what between the dead body of the captain on the parlour floor, and the thought of that detestable blind beggar hovering near at hand, and ready to return, there were moments when, as the saying goes, I jumped in my skin for terror” (Stevenson 15).

Jim and his mother were both terrified to the point of wanting to leave because of the odd noises in the eerily quiet inn and the dead man laying before them (Stevenson 15).

“Indeed, it seemed impossible for either of us to remain much longer in the house:  the fall of coals in the kitchen grate, the very ticking of the clock, filled us with alarms.  The neighbourhood, to our ears, seemed haunted by approaching footsteps; and what between the dead body of the captain on the parlour floor, and the thought of that detestable blind beggar hovering near at hand, and ready to return, there were moments when, as the saying goes, I jumped in my skin for terror” (Stevenson 15).

Stevenson sets an atmosphere of eeriness for Jim and his mother by showing readers how much the two did not want to stay in their house.  There were sounds, even small ones from a clock, that were scaring them.  There were also people, like the dead captain and the vagrant outside the door, that were making them feel uneasy in their house alone (Stevenson 15).

Quoting material from a source is taking the direct wording, style, and formatting from a source – using ellipsis or brackets if the writer takes away (ellipsis), changes (brackets), or adds (brackets) anything of his or her own.  The length of the quotation is up to the paper writer and will need to be in block format if the prose quote is longer than four paper lines or if the poetry quote is longer than 3 consecutive lines or if a drama quote includes back and forth dialogue.

Stevenson writes that Jim and his mother hear “the fall of the coals…[and] the very ticking of the clock” which makes them want to leave (15).

Summarizing material from a source is when a writer takes a large portion of the information and condenses it into one main idea.  This could be as simple as saying a summary of The Hunger Games movie is about a girl named Katniss that volunteers to go through a deadly annual game in place of her sister, and through her trials and determination, she successfully navigates the game and challenge the political system in place at the same time.

*Often times a summary will be more than one sentence, but note how the whole movie (and almost whole series of movies) is condensed into a very short amount of space, but still illustrates the main point.

Ellipsis and Bracket Use

Prose Citation:  What Comes After the Quote and Paraphrase Examples

Quoting 1, 2 or 3 lines of poetry. You can quote three or fewer lines of poetry without having to place the lines in a block quote. Use quotation marks. Use a slash to indicate the break between lines. Put the line numbers in parentheses. Place the period at the end of the line number(s):

Example:  One poet ponders, “Have I a voice in making a choice/Or is it some force/Determines my course?” (Perrine 1-3).

Example:  Bob Dylan makes a call to politicians in his song “The Times They Are A-Changin’:

Don’t stand in the doorway

Example:  Lucille Clifton uses imagery such as “big” (1) and “mighty” (11) to describe her wonderful hips.

Example: McKay describes America as a “cultured hell” to show the country’s good and bad side (4).

When quoting from plays written in verse form, follow the rules for quoting poetry. In addition, if the play is divided into acts and/or scenes, convey this information in parentheses (act #, then scene #, followed by line #).

Example:  Fewer than four lines from an essay on Oedipus the King:

Knowing he is blind, Oedipus is full of woe and laments, “Death take the man who unbound/My feet on that hillside/And delivered me from death to life! What life!” (Sophocles, Exodos, lines 1301-1303).

Example:  Four plus lines blocked from an essay on Hamlet:

Shakespeare illustrates a debate between the righteousness of life over death or death over life when Hamlet is speaking only to himself:

To be, or not to be, that is the question:

Whether ‘tis nobler in the mind to suffer

The slings and arrows of outrageous fortune,

Or to take arms against a sea of troubles,

When quoting from plays written in prose, follow the rules for quoting prose. Do NOT use slash marks to indicate line division in the original, and use act, scene, and page number in parenthesis (act #, scene #, page #).

Example: From an essay on Henrik Ibsen’s A Doll House:

Nora finally realizes she has been nothing but a doll in Torvald’s house when she confronts him saying, “Torvald – in that instant it dawned on me that for eight years I’ve been living here with a stranger, and that I’d even conceived three children – oh, I can’t stand the thought of it! I could tear myself to bits” (Ibsen, III.251)

**Block format for plays written in prose will be used when the words from a character exceed four lines in your typed essay.

If you are quoting back and forth dialogue, always set the quote off in block format, even if it takes just two lines. Put each character’s name in capital letters, followed by a period. All additional lines spoken by the same character should be indented by an extra quarter inch (approximately three spaces).

Example:  From an essay on Sophocles’ Oedipus the King:

OEDIPUS. Am I to bear this from him? –

Damnation/Take you! Out of this place! Out

TEIRESIAS. I would not have come at all if

you had not asked me.

OEDIPUS. Could I have told that you’d talk

fool of yourself, and of me? (Sophocles,

**Dialog is formatted in block fashion. Notice there are no quotation marks and the parenthetical citation has no period after it.