Each year, students at the Chilton-Clanton campus of Jefferson State Community College work in groups to create a museum-style display.

“Because of the Bicentennial (of Alabama), we tried to think of something that was origin related,” Associate Dean and English professor Ashley Kitchens said of this year’s display.

She said it is good to see them learning interesting facts and being creative.

Students chose from a list of suggestions and covered a variety of topics from marriage to sports to Alabama Native American stories.

Each work was shown on a display board, and the history projects have an additional visual piece to set in front of the board similar to what one might find in a museum.

Smith said it was interesting to find out that in times like the Middle Ages, “they were marrying not for love, but for economic reasons.”

Martin said she enjoyed researching the traditions and decorations related to marriage and incorporating them into the display.

In its timeline, the group started with marriage beginning in Mesopotamia for economic reasons. Martin said there were some time periods that they could not find information for.

Vanderslice said establishing a timeline was the most challenging aspect of the project “because there are so many gaps.”

History student Corey Short and his group chose the Battle of Horseshoe Bend.

Short said he wanted to focus on this topic because “that’s an Alabama-based battle and it’s actually a national park that is in Alabama now.”

“One of the hardest challenges was finding reliable sources … You didn’t want to pull it just from anywhere on Google. You actually wanted to go through and test that source and make sure that everything in that source held true,” Short said.

Groups were required to have five sources for the project.

Short said it was interesting to learn that the Creek Indians name for the Tallapoosa River was Burnt Corn Creek.

“I enjoyed putting the board together and designing the layout,” Short said. “The tabletop (battle scene) was interesting to make because we included the spruce trees because they kind of look like pine trees. We included them because when you read up on the battle everything was surrounded by pine trees. We wanted it to look as real as possible.”

History student Hannah Robinson said her group wanted to focus on Mardi Gras “because of the misconceptions that it originated in Louisiana or New Orleans when it actually originated in Mobile.”

Robinson said when Mardi Gras was first celebrated in Mobile it was still a part of what would become the Louisiana Purchase territory. Robinson said Mobile was the first capital of the territory.

The earliest reference the group found to Mardi Gras in Mobile was 1703.

“I enjoyed finding out how Mari Gras is much more than it looks,” Robinson said. “It looks just like a party, and everybody has fun, but there is so much more symbolism to it and meaning to it.”

She said Mardi Gras means “Fat Tuesday” which traditionally is when Catholics would overindulge in what they would have to give up for Lent starting the following day.

She said finding information specifically about the celebration in Mobile proved challenging.

English students Alisson Hubbard and Erica Powell focused on origin stories of the Cherokee tribe with their group.

“A lot of us in the group actually have some Cherokee origins,” Powell said.

Hubbard said the number seven had significance to the tribe.

“There are seven seven-sided stars to represent the seven religious festivals and on their flag,” Hubbard said.

She said some of the houses were also built with seven sides.

Narrowing down the Cherokee stories that they wanted to feature proved to be challenging for the group.

Powell said she enjoyed the stories of how the world began and how the tribe saw the world and interacted with nature.

The student projects will be on display in the hall of the college until Nov. 28. 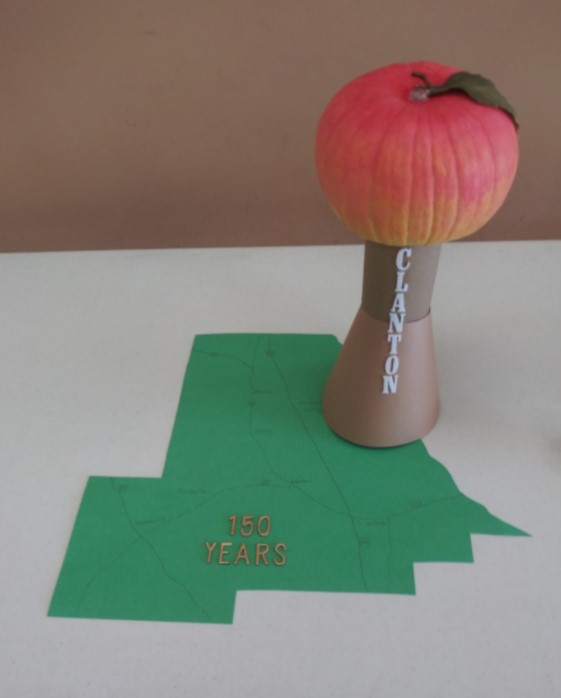 Literature and history classes contributed to projects surrounding Native American Origin stories and origins of traditions or holidays in history; these projects were paralleled with Alabama's Bicentennial Celebration along with Clanton's 150 Year Celebration being held at Clanton