A Holiday to Understand and Celebrate: Juneteenth

Mysteries and Oddities of the World

Get In the Spotlight!

On a late Tuesday night on January 26, the state of Alabama experienced some thunderstorms as it normally does that time of year. No one predicted what would happen around 10:00pm in Fultondale, a town next to the city of Birmingham and right off I-65. An EF-3 tornado struck the town so quickly that the weathermen and EMA couldn’t warn citizens quickly enough. The tornado touched down and continued the destruction for ten miles injuring 30 and killing one teen.

After weeks went by and the large groups of helpers had left, Jefferson State’s Welding AWS Chapter students John Decker (Chair) and Zack Rickles (Vice Chair) came up with an idea to help the tornado victims out. They organized a donation collection and purchased gift cards to Wal-Mart and Target in $20.00 increments.  The chapter provided the gift cards to the Mayor of Fultondale, Mayor Holcomb, who had a team in place to process aid to those citizens still in need of help. On March 30, 2021, students John Decker, Zack Rickles, Amelia Wright (Media Chair), along with welding instructor Danny Taylor, presented Mayor Holcomb with the gift cards. The meeting and conversation with the mayor also led to discussions about a partnership with Jefferson State Community College’s welding program and the city of Fultondale to help with clean-up and damage to the high school as well. 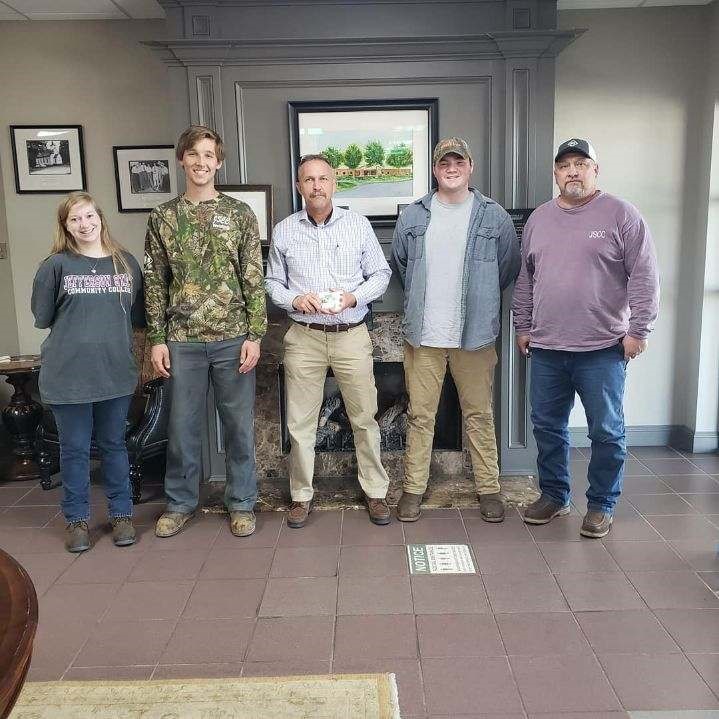 The Student Government Association invites you to come out and help us celebrate Pioneer Day. On Friday, September 24th, 2021, students, employees, and alumni will converge on the Jefferson Campus for the first in-person, on-campus Pioneer Day in two years. The event is usually held each September to celebrate the college’s founding, and functions as our homecoming event. Since last year’s Pioneer Day was a casualty of Covid-19 and had to be held virtually, organizers of this year’s event are ecstatic to see the event return to campus.

As in years past, Pioneer Day will feature The Amazing Race, a competitive series of physically and mentally challenging events and games. Events will be timed, and groups will compete in spirit competitions as well. Plans for new games are in the works, with old standbys like Tug-of-War, Giant Sack Race, and an Obstacle Course making their return for the 2021 Pioneer Day.

After the events are over, the day will conclude with an awards presentation and lunch, provided by Jefferson State Culinary and Hospitality Institute.

Students, faculty, alumni, and staff are encouraged to form groups and enter the Amazing Race. Information and registration info can be found at www.jeffersonstate.edu/pioneerday.

To see pictures from 2019’s Pioneer Day, go to http://www.jeffersonstate.edu/amazing-race-photos-2019/.

Help the SGA make the return to campus in the fall a blast by participating in this free event. We hope to see you at Pioneer Day.

Jefferson State Community College recognized the best and brightest students and faculty on Thursday, April 15th at this year's honors convocation. The celebration was held virtually using a video stream available through the college’s website.

Dr. Mike Hobbs, Vice President for Student Affairs, presented the Campus Organization Awards and Danielle Coburn, Vice President of Academic Affairs, announced the students who received transfer scholarships for four-year universities and the Divisional Awards for Transfer and General Studies. Leah Bigbee, Director of the Center for Workforce Education, shared the Divisional Awards for that area.

David Bobo, Director of Community and Media Relations, presented the award for Outstanding Alumnus to Dr. Diane Woodall, M.D. who has had a successful career in the medical field. Dr. Woodall’s accomplishments demonstrate the value of a Jeff State education.

The May 2021 Jeff State Graduation Ceremony came with a unique experience for those graduating from the school: a hybrid graduation. Graduates were able to choose to walk in-person across the stage of the Alabama Theater or send in a photo of themselves to be shown on the big screen so they could participate virtually. Not only was there a large socially distanced crowd at the Alabama Theater, but the ceremony was broadcast live on the Jeff State website for anyone not physically present to cheer on their graduate virtually.

While the hope is to return to fully in-person graduations like the ones before the pandemic, this was a very exciting midway point. The ceremony wasn’t fully virtual like it was the year before, and it wasn’t fully in-person like we plan to see in the future. It was a great sign that, while we are not out of the woods of the COVID-19 pandemic yet, we are making progress in returning to normal. This year was a great celebration for all who graduated and all of the parents, friends, and faculty members who got to celebrate with those graduates.