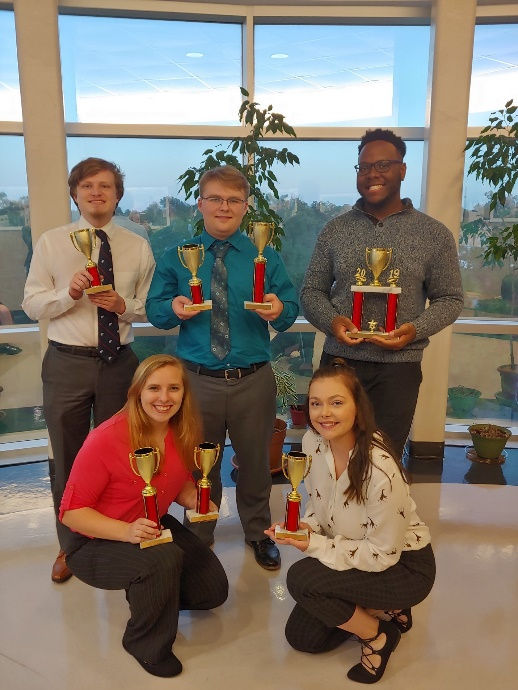 The Jefferson State Speech and Debate Team traveled to Baytown, Texas on September 19-22 to compete in the Mendoza Debate tournament, hosted by Lee College.  Team members Nathan Wright, Heaven Sheppard, Kelvin Thomas, Daniel Davis and Kelsey Wilson represented Jeff State and brought home the Top Community College Award.  Thomas served as a research assistant during debate preparation time and Wright, Sheppard, Davis and Wilson competed in the novice division of IPDA debate.  IPDA stands for the International Public Debate Association and is an impromptu-style of debate where the topic changes each round and debaters have 30 minutes to come up with arguments and evidence to support or negate the resolutions.

After 7 preliminary rounds of competition, all Jeff State debaters made it into elimination rounds. Nathan Wright and Heaven Sheppard were finalists, with Wright winning 1st place in Novice IPDA and Sheppard taking 2nd place.  Daniel Davis was a quarterfinalist in Novice IPDA and Wilson was a semi-finalist.  It was the first tournament for both Davis and Wilson.

In addition, Wilson won the 1st Place Novice Speaker award and Wright took home the 5th place speaker award.  Speaker points are awarded by judges based on factors such as delivery, courtesy, refutation and organization.

The team will head out to Middle Tennessee State University for their next tournament in early November.  For more information about the team, please contact Dr. Janice Ralya (jralya@jeffersonstate.edu).