The Association of College English Teachers of Alabama (ACETA) hosted its 71st Annual Convention on Friday and Saturday, March 1-2, 2019 at the University of Montevallo in Montevallo, AL.  The conference, officially titled "Conference on the Sympathetic Imagination: Literature, Film, and Writing of Sympathy and Empathy," seeks to reach current and retired instructors, doctoral students, and bachelor's and associate's degree students as well, presenting them opportunities to present and attend forums based around the conference theme.  This year was the second year Jefferson State students were featured as presenters.  Two students from the Clanton campus were among several university students and instructors as presenters for panels during the two-day conference.

Last year, Carly Niswander and Anna Taylor, two students from the Clanton campus, worked together to present a panel on the novel An Estate of Memory.  This novel follows the lives of four women in a Nazi concentration camp as they face brutality, illness, pregnancy, and death.  The two students were incredibly well poised and presented their ideas to an audience of college professors.  The professors asked many questions of the student as this novel is an obscure book many had never heard of.  The students both said the opportunity was a once in a lifetime experience.

This year, two more students with Jefferson State roots presented topics at the conference.  Destiny Jones, a 2018 Clanton-area graduate of JSCC and now a UAB student, presented alongside Associate Dean and English instructor Ashley Kitchens on the subject of Margaret Atwood's The Handmaid's Tale.  Each looked at an aspect of either male oppression of females or female oppression of their own gender and related the ideas to modern topics like female image in media and social media and females in politics.  Alyssa Glass, a current Clanton campus student, presented a look at the idea of Disneyfication of several classic fairytales.  Students presenting found the experience to be engaging as they got to explore ideas they had written about even further.

Jefferson State continues to be a strong presence at the ACETA conference. Students and instructors alike are encouraged to research participation in ACETA at the official website:  https://alcollegeenglish.org/.

Bridges to the Baccalaureate Program

A Day in the Life of a Scientist

By Nicholas Kin, Coordinator: Bridges to the Baccalaureate Program

Ever wondered what a biomedical scientist does every day?  For eight Jefferson State students, that is exactly what they experienced last summer.  Jefferson State Community College, in partnership with UAB and Lawson State, was awarded a five-year Bridges to the Baccalaureate grant from the National Institutes of Health.  The goal of the program is to increase the number of individuals who enter the biomedical research workforce.  The approach to achieving this goal is three-fold: 1. provide biomedical research opportunities through paid summer internships, 2. support students through completion of an Associate’s degree, and 3. support students through transfer and completion of a Bachelor’s degree.  Each year students are selected and paid $5,000 to participate in a ten-week summer biomedical research internship at UAB.  Since 2015, 32 Jeff State students have successfully completed the summer program with 84% graduating with an Associate’s degree.

The ten-week summer internship at UAB provides each student with the opportunity to not only see what a scientist does every day, but also to work alongside mentors on their own biomedical research project.  During the first two weeks of the summer program, students participate in a biomedical research bootcamp class.  Students learn about biomedical research, research ethics, how to keep a research notebook, and how to perform standard research techniques through hands-on experiences.  Following the bootcamp, students spend eight weeks in their assigned research lab working on an independent research project.  The summer program culminates with a research symposium where each student prepares a poster summarizing his or her research project including background information, experimental results, and conclusions. 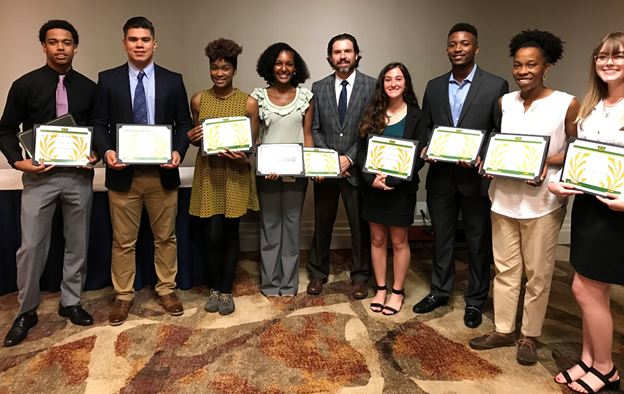 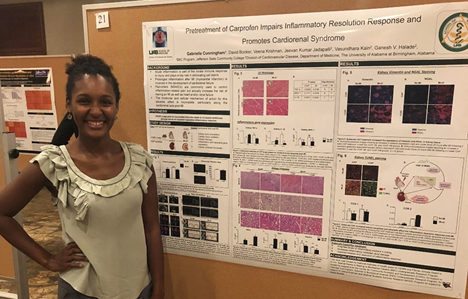 Gabrielle Cunningham, a Nutrition major at Jeff State and participant in the summer 2018 program, states that “the summer biomedical research program was amazing!”  Her research project focused on understanding the effects of prolonged use of Non-Steroidal Anti-Inflammatory Drugs (NSAIDs) on heart and renal function.  “The faculty/staff were so dedicated and worked with me daily to ensure I had everything I needed,” she said.  Because of her hard work, Gabrielle was awarded the Reynolds Blazing to Biomedical Careers Most Promising Scientist Award at the summer research symposium.  Even more impressive, Gabrielle’s summer work was recently published in the journal of Life Sciences, a peer-reviewed international journal publishing original research articles that emphasize the molecular, cellular, and functional basis of human therapy.  Browse this publication here.  Gabrielle is only 4 classes shy of graduating with an A.S. in Nutrition from Jeff State. After graduation she plans to transfer to UAB to get a B.S. in Nutrition.

Thanks to Joseph Mitchell, Jefferson State is a nationally ranked culinary program. With the help of Mitchell’s first-class faculty Jefferson State is the longest credited program in the state of Alabama. This program gives students four-degree options to choose from. All four-degree options are taught by professionals who have worked in the food industry. To be a chef, students can get a degree in food services, culinary apprentice, or culinary baking. If students want to work in the front of the house, they can take Culinary Restaurant Hospitality. For beginners, students take a basic food class. In this class, you are exposed to knife cuts and breakfast cookery, etc. Students also take a Garde Mangers class where students learn subjects such as ice sculpture to meat cutter. Lastly, students work beverage management where they learn different wines and other beverages. In January, Jefferson State will have a new program called Culinary Nutrition. In this class, students will take labs and go into the scientific understanding of foods. In order for students to take this class, students are required to take advanced science classes. Jefferson State also operates a restaurant called The Bistro Provari, at the Shelby campus. With this restaurant, students will learn how to work in a real restaurant. The Birmingham area is rated one of the top 10 cities in the U.S. to look for growth in the restaurant Industry. In order for students to learn and grow in culinary, many contribute to multiple food organizations. Some days students will cook for a charity event or cook for food shown. Mostly students who join this program enters competitions against fellow team members. Graduates are sometimes offered an internship at a restaurant or country club. The students who don’t have an internship will usually go to hotels, restaurants, or retirement homes to work at. Before joining Jefferson State, Mitchell lived in Nashville where he worked in restaurants and hotels, such as Mario’s, an Italian restaurant in Nashville. In 2002, he joined Jefferson State. Out of all the places Mitchell has worked Jefferson State has been the best. Mitchell loves seeing the joy in students faces when they cook. To make a positive work environment, instructors should put students first.

The Legacy Museum:  A Classroom Experience Like No Other

On February 7, 2019, American literature and US history class students in Clanton combined for an enlightening field trip to the Equal Justice Initiative’s Legacy Museum in Montgomery, Alabama.  The Legacy Museum, which opened just last April, documents the history of oppressed people from the times of slavery through today’s era of often unfair mass incarceration and sentencing.  The museum is located on Coosa Street in Montgomery on what once was a large slave warehouse and market, and the memorial, The National Memorial for Peace and Justice, is located several blocks away on a large six-acre site.  Although the classes were not able to visit the memorial, the museum itself gave the students the ability to step back in time and experience some of the country’s most heinous acts of racial terror; it also gave the students a chance to see and understand some of the same inequality that is experienced today.

The museum itself houses historic photographs of mobs posing for pictures beside lynching victims, historic advertisements for runaway slaves, and various era signage illustrative of oppression of many peoples.  Besides these visuals, the museum has exceptional technology that presents visitors with the ability to click on a map of the United States and learn about lynching victims in each state and county within each state.  Other technological presentations feature clickable information on slavery, lynching, psychological effects of brutality, economic effects of brutality, medical mistreatment of oppressed peoples, and many other topics.  Three movie arena areas also continuously run videos featuring information about the Community Remembrance Project, the collection of dirt, mulch, and clay from various sites of lynching victims; current stories from inmates in St. Clair Correctional Facility; and several other personal or family biographies. Handwritten letters line one wall from inmates serving time for crimes they either did not commit, or they got an unfair sentencing for.

Students in both classes were self-led around the museum and took in the information with sincerity and solemnity.  Many students commented about some of the information they had never known before this trip and questioned some of the ideas presented.  On one of the walls that highlighted modern day happenings, a student read about the language about segregation of schools that is still present in Alabama's constitution and was both surprised and appalled to learn that at last vote to amend this language in 2012, the amendment was not passed.  Overall, students and the two class instructors all enjoyed the ability to delve deeper into material being covered in the classroom.

Well, it’s 2019 and this generation is all about finding new and interesting ways of completing traditional tasks. However, I am glad to inform that no one has dared to change Funeral Sciences. It seems that the Funeral Sciences have been ahead of its time for many years. In a recent interview, Mrs. Venus Smith of Jefferson State Community College, noted that the Funeral Sciences are still as relevant as ever. Not only is the Funeral Sciences field still relevant, but it also generates a fantastic success rate. According to the most recent survey, Jefferson State itself produces a success rate of 89 percent. Even with an estimated 80 students registered in the program, a result such as that is remarkable. With a graduating success rate such as that, it’s become common to think of this program as easy. Some people even going as far as labeling these professionals as “glorified ushers”. But this year and a half long course is not for the average student just looking to skate by. The time and commitment given by each student is passion at its finest. It’s not difficult to see where students get their extra motivation when they have a professor like Mrs. Smith.” I just want my students to achieve their goals, whatever they may be” (Venus Smith, 2018.) With her passion for the Funeral Sciences starting at the young age if 14, she’s already been teaching at what she believes to be the best school in the state for 21 years, after completing her own students on the very same campus. Funeral Sciences may not be something we think about often, or give enough credit to, but it’s safe to say that not only was the science ahead of its time, even so today but the care and passion shown by its professionals will continue to provide a thriving and relevant career path for generations to come.