Earlier this year Chef Jason Bierley of Jefferson State Community College, along with a few others, made the 108-mile round trip from the Shelby-Hoover campus to the Pell City campus and back. The purpose of this event was to raise awareness for JSCC’s Culinary and Hospitality program and fundraising which rewarded two students with a one-thousand-dollar scholarship each.

Plans are already being made for another ride in May 2020. For those interested in participating in the upcoming ride or who would like more information, check the links below to the fundraiser’s Facebook and bike route via Strava.

On Friday, September 27th, 2019, students, employees, and alumni showed up at the Jefferson campus to celebrate Pioneer Day, our homecoming event. The day was highlighted with The Amazing Race, a competitive series of physically and mentally challenging events and games.

Groups competing in The Amazing Race ranged from student groups such as Sigma Chi Eta and the Spotlight Drama Club to faculty groups and others. Each event was timed, and the group with the lowest total time won the race. Groups also competed in spirit competitions along the way. Events tested each group’s motivation, perseverance, and cooperative communication. 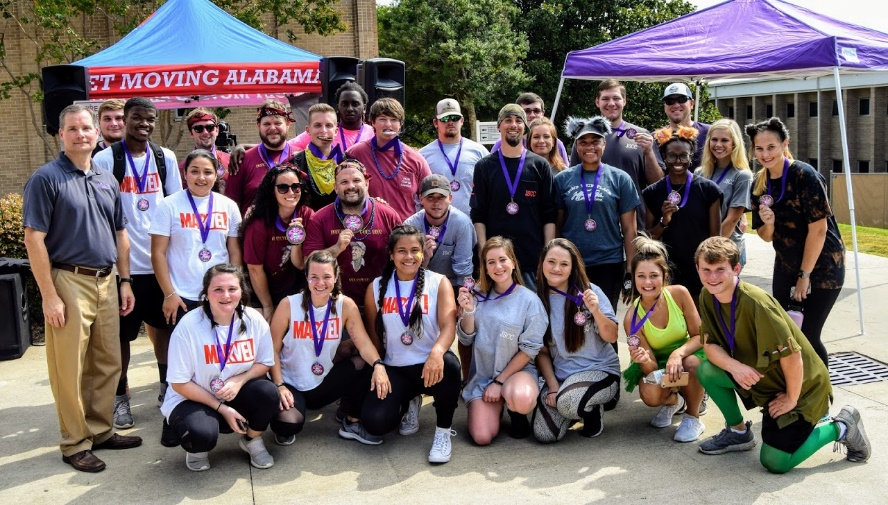 The race began after an introduction from President Keith Brown, and afterwards, lunch was provided by the Jefferson State Culinary and Hospitality Institute. Pioneer Day was sponsored by the Governor’s Commission on Physical Fitness and Sports and the Student Government Association.

Pioneer Day began in 2015 marking Jeff State’s 50th anniversary. This is the third year to include the Amazing Race, which is the brainchild of Libby Holmes in the Office of Community Outreach.

“I love how students, employees, and alumni from all four campuses get to come home to the campus where it all began and celebrate our Jeff State family,” Holmes said. Plans are already in the works for next year.

To check out pictures and videos from this year’s Pioneer Day, visit http://www.jeffersonstate.edu/amazing-race-photos-2019/

Producer and director Joss Whedon once said “Equality is not a concept. It's not something we should be striving for.” These words could not be any truer or needed in these days of massive inequality. Alabama has a long history of missing the bandwagon when it comes to getting on board with modern ideas, most notably our history as the flashpoint for Dr. King’s movement. Today in 2019, the problem of discrimination and harassment among LGBTQ students is appalling. JSCC Shelby-Hoover Campus’ PTK Honor Society, Beta Lambda Delta Chapter, decided we needed to do our part to making a much more equal Alabama by hosting a LGBTQ Conference to train instructors and executives to better help students of this demographic.

Beta Lambda Delta was inspired to educate instructors of Alabama community colleges when one of our very own members ran an anonymous survey to LGBTQ students asking if they felt safe on-campus at JSCC locations. The results were split down the middle. 50% said yes and 50% said no. As we had received these results, 28-year-old Ronald Peters was murdered in Georgia by three men in broad daylight, simply for being gay. And just before that, 17-year-old Nigel Shelby of Huntsville committed suicide from intense bullying for being open about being gay. These two deaths combined with our survey results told us we needed to take action.

In attendance of this LGBTQ conference were teachers and administrators from nine community colleges, three high schools, one school system administrator and directors from two non-profit organizations. In total we had 54 people who had come to our campus to be trained to better help students.

The training was conducted by Amanda Keller and Lauren Jacobs from the Magic City Acceptance Center. Their presentation focused on gender identity, proper pronoun usage, and how to listen to students in distress. At the end of the presentation, all attendees were asked to fill out a survey asking if they had learned anything and their opinion of the quality of the conference. Out of 41 surveys from attendees, 36 had positive feedback saying that the information they had learned was insightful and would be beneficial in their schools.

Through our efforts we learned that many more schools than previously thought were interested in gathering additional resources for LGBTQ students and that acceptance and a desire to help LGBTQ students is still out there. We will continue to help everyone we can as members of PTK, but for now, this one was for the people who are LGBTQ.

Anything and everything geeky is welcome at the annual PioneerCon at Jefferson State Community College Shelby - Hoover Campus hosted by Sigma Kappa Delta. This year’s event on October 17 proved just how much students and faculty need to release their inner geek, pulling the biggest crowd since its inception in 2016.

For the first time, local artists and vendors from the community as well as students from Patrick Mayton’s art class were invited to hold booths to sell artwork, shirts, stickers, and much more. Another first was a dedicated game room with PlayStation 4, board games, and snacks. If chips and cookies weren’t enough, grilled cheese sandwiches and chili was served by JSCC’s own Bistro Provare.

Throughout the day, panels and discussions were hosted in the Judy M. Merritt Health Sciences Building multipurpose rooms. These included: The Enduring Characters of Fahrenheit 451; Harry Potter and Psychosocial Theory; Poe In Pictures: Rhetorical Visions in ‘The Masque of the Red Death’; The Haunting House of Greysbane ‘Dungeons and Dragons’ campaign. Award winning author Jon Padgett provided the keynote address.

Students are always a big part of PioneerCon, and this year’s student participation did not disappoint. Weird Stories, a series of staged readings, was performed by students from JSCC’s Spotlight Drama Club. Students from instructor David McRae’s history classes presented posters and provided overview on real-life witches from the past.

“Next year we would like to see more staff and faculty involved and branch out to include all disciplines,” SKD Sponsor and Wingspan Editor Katie Boyer says. Looking to next year’s event Boyer goes on to encourage students to contact any SKD sponsor with ideas toward PioneerCon 2020.

What started as an idea tossed around between JSCC instructors Jamie King and Katie Boyer has turned into one of the most anticipated events each October. If you happened to miss this year’s event or maybe you have a great Halloween costume to recycle, be sure to stay on the lookout next fall semester for updates on the next PioneerCon.

By Fernanda Maldonado and Brian Rockett

The Jefferson State Student Government Association invites you to our second annual winter formal on February 7, 2020 from 7 pm-11 pm at the Shelby-Hoover campus, in the multi-purpose room and lobby of the Judy Merritt Health Sciences Building.

The “Roaring Twenties” themed event will feature a jazz band with dance lessons, DJ, photobooth, themed mocktails, and a special performance from the Spotlight Drama club as a nightcap on a perfect night. Tickets are only $10 per person and may be purchased at any JSCC campus location cashier window.

Since the theme is the Roaring Twenties, we encourage you to dress up in period pieces, but don’t let wardrobe keep you from this special night. Anything from Sunday best to formal attire is encouraged. We want students to come hang out and have a good time. We will also crown a king and queen for the night.

Have a date, spouse, or significant other who’s not a student? No problem! Students can purchase tickets and show their dates how special Jeff State is and what campus life is all about. Not feeling the dating scene? This is a perfect opportunity to hang out with friends and make some great memories.

Last year’s formal was the first for Jeff State in over forty years, and almost 250 people showed up to dance the night away. We want this year’s formal to be even better, so purchase tickets now. All tickets must be pre-purchased at a campus cashier window. No tickets will be sold at the door.

The Student Government Association is proud to present this year’s winter formal. See you in February! For more information on the formal, visit www.jeffersonstate.edu/formal.